The Coral Springs Center for the Arts is rocking away in February and March with 14 concerts and shows celebrating legendary musicians, comedians, and more. The state-of the-art performing arts center is located at 2855 Coral Springs Drive. Tickets for all concerts and shows are now available for purchase by calling the Box Office at 954-344-5990 or by going online to www.TheCenterCS.com. 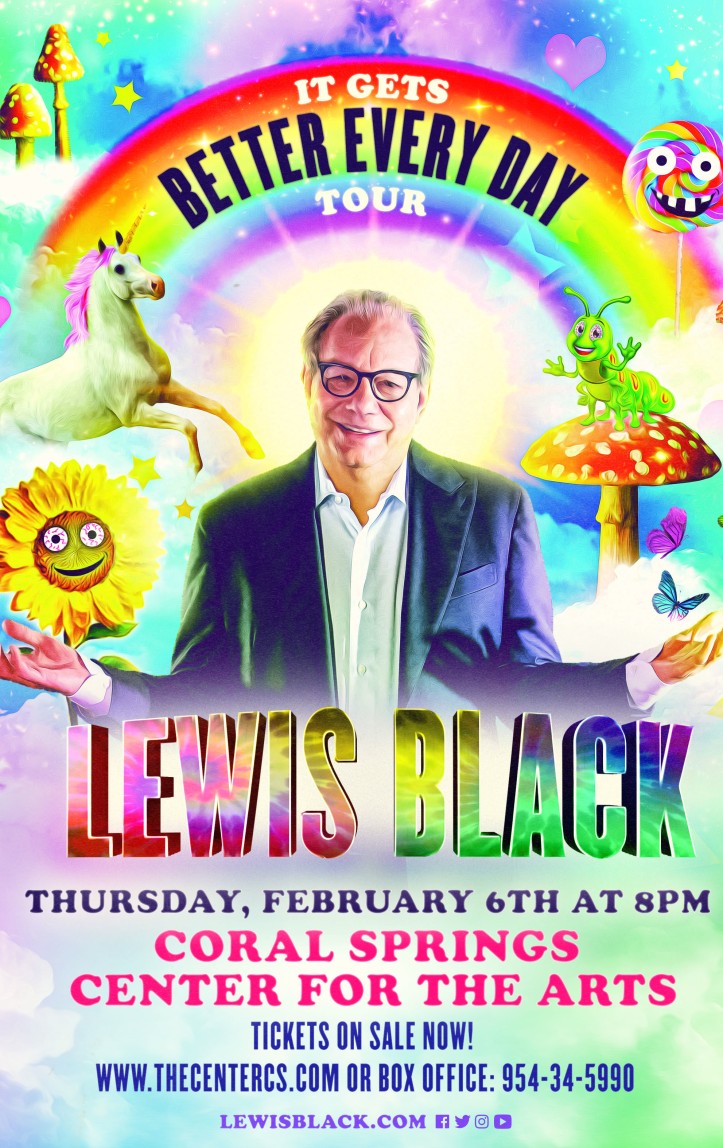 It Gets Better Every Day Tour

Known as the king of the rant, Lewis Black uses his trademark style of comedic yelling and animated finger-pointing to skewer anything and anyone that gets under his skin. His comedic brilliance lies in his ability to make people laugh at the absurdities of life, with topics that include current events, social media, politics and anything else that exposes the hypocrisy and madness he sees in the world. In 1996, he began doing a weekly rant on Comedy Central’s The Daily Show, followed by his Emmy-nominated specials on HBO, and his roles in the ABC miniseries Madoff and such films as Barry Levinson’s Man of the Year, Steve Pink’s Accepted, and Paul Feig’s Unaccompanied Minors. In 2015, he voiced the character “Anger” in Pixar’s Oscar-winning Inside Out. Black has appeared on Larry King Live, Piers Morgan Tonight, Late Night with Jimmy Fallon, The Late Show with David Letterman, Late Night with Conan O’ Brian and The Late Late Show with Craig Ferguson, as well as numerous spots on CNN and MSNBC.

Starring Jeannie Austin on piano and vocals with her back-up singers and band, Tapestry: Carole King Songbook faithfully recreates the glorious sound of a Carole King concert, leaving you with memories of the great music she wrote and recorded.

Go behind the music and inside the story of Frankie Valli and The Four Seasons in the Tony and Grammy Award®-winning true-life musical phenomenon, JERSEY BOYS. From the streets of New Jersey to the Rock and Roll Hall of Fame, this is the musical that’s just too good to be true.

Masters of Illusion is the hit CW television series and America’s largest touring magic show. Only the best, most unique, amusing, astounding and amazing performers have been chosen to perform in Masters of Illusion, a huge stage phenomenon born from the multi-award winning television series and starring the world’s greatest award-winning magicians. This 21st century magic show is unlike anything you have seen before – filled with modern illusions and arts of deception, performed live on stage. Watch closely as you experience things that just can’t be done……or can they?

Take a chance on ABBA MANIA, the world’s number one touring ABBA tribute concert. The show has been selling out theatres and concert halls since 1999 with two hours of uplifting, dance inducing and sometimes heart-breaking songs, fully live with fantastic staging, lighting and effects. The show recreates ABBA’s sound not only perfectly, but respectfully too. ABBA MANIA is not only for lifelong, die hard ABBA fans but the new generation of fans, who never had the opportunity to see ABBA live. Hits include Dancing Queen, Waterloo, Mamma Mia, The Winner Takes it All, Super Trouper, Fernando, Take A Chance On Me, and many more that continue to fill dance floors worldwide.

This is Elton! Rus Anderson is Elton John’s official body double for his Farewell Yellow Brick Road world tour videos & photos! Picked by Elton himself, Rus performs as a young Elton John in The Rocket Man Show—driving a night of Elton’s greatest hits, with spot on vocals and fierce piano playing.

It’s “To the Creature Rescue!” as the Kratt Brothers activate their Creature Power Suits. Through hilarious pratfalls and amazing animal ‘wow facts’ the Wild Kratts rescue their favorite invention from Zach’s clutches so the animals of the creature world are safe once again.

Hits of the Brits:

Featuring the Music of The Beatles & The Rolling Stones

The British Invasion brought us the two most popular rock groups of all time, the Beatles and the Rolling Stones, as well as the liveliest debate in rock history – which band is the greatest? These two legendary bands will engage in an on-stage, mash-up duel – a musical “showdown of the hits” if you will – featuring internationally renowned tribute bands, The Nowhere Band & stones

Although it has been over 40 years since Bridge Over Troubled Water was recorded, Art Garfunkel’s image and signature vocal remain among the most instantly recognizable in popular music. After partnering with singer-songwriter Paul Simon, the popular duo (Simon & Garfunkel) recorded a groundbreaking string of classic albums (Wednesday Morning 3 A.M.; Sounds Of Silence; Parsley, Sage, Rosemary and Thyme; The Graduate; Bookends; and Bridge Over Troubled Water) and an equally impressive body of songs, many of which  became pop standards: The Sound Of Silence, Homeward Bound, I Am a Rock, Kathy’s Song, April Come She Will, At the Zoo, A Hazy Shade of Winter, America, Scarborough Fair/Canticle, Mrs. Robinson, The Boxer, Bridge Over Troubled Water, Cecilia, El Condor Pasa, and My Little Town. Over the last 20 years, Garfunkel has recorded and released a dozen highly acclaimed solo albums, and continues to perform in concerts  worldwide.

2020 marks 35 years since Paul Reuben’s classic, quirky sensation Pee-wee’s Big Adventure hit theaters. A critical and financial triumph at the box office, the 1985 comedy, Pee-wee’s Big Adventure, starring and co-written by Reubens. grossed over $40M domestically and made Pee-wee Herman a household name. The movie marked the feature film directorial debut of Tim Burton and the first major studio film for composer Danny Elfman, beginning the now legendary filmmaking duo’s partnership which has resulted in 16 films over the last three decades. The movie is a timeless classic that continues to entertain and enthrall generations of fans to this day. The 35th anniversary of the film is being celebrated with Pee-wee’s Big Adventure 35th Anniversary Tour with Paul Reubens. Each event will include a special screening of the film, followed by amazing stories about the making of the movie told by Paul Reubens.

An incredibly powerful performer, comedian Vic Dibitetto churns energy, honesty and humanity into nonstop laughter. His pace is frenetic. He’s been called a cross between Rodney Dangerfield and Ralph Kramden. The bottom line is, Dibitetto leaves his audiences breathless with laughter, and  is a successful national headliner who sells out theatres nationwide. He has  appeared on America’s Funniest People (ABC), where he was a $10,000 Grand Prize winner. He also headlined Stand-Up Spotlight (VH1) and Last Laugh at Pips, and acted in a pilot with Woody Allen and Danny Aiello.

An Intimate Evening of Songs and Stories with

Legendary artist Graham Nash is a two-time Rock and Roll Hall of Fame inductee – with Crosby, Stills, and Nash and with the Hollies. He was also inducted twice into the Songwriter’s Hall of Fame, as a solo artist and with CSN, and he is a GRAMMY Award winner. The original classic union of Crosby, Stills & Nash (& Young) lasted but 20 months. Yet their songs are lightning rods embedded in our DNA, starting with Nash’s “Marrakesh Express,” “Pre-Road Downs” and “Lady Of the Island,” from the first Crosby, Stills & Nash LP (1969).  On CSNY’s Déjà Vu (1970), Nash’s “Teach Your Children” and “Our House” beseeched us to hold love tightly, to fend off the madness that was on its way.

Reading through his resume, you’ll see Bobby  Collins has performed in hundreds of theatres and venues, hosted VH1’s Stand-up Spotlight, acted in television and movies, and even authored a best-selling book. He’s a popular keynote speaker for Fortune 500 corporate events, been on day and night talk shows, and appeared at charity events. He’s garnered a Grammy nomination, and has  toured with such titans of entertainment as  Frank Sinatra, Cher, Julio Iglesias and Dolly Parton. He’s worked alongside Chris Rock, Ray Romano and Drew Carey, as well as other contemporary comedians. His resume accurately reveals what he does. However, it cannot fully convey who he is—a very funny guy! Born in Queens, Bobby is a proud, tried and true tribesman of New York City. His loyal fans affectionately greet him with a rousing BOBBBYYY! wherever he goes.

How to Get Tickets:

Tickets for all concerts and shows at the Coral Springs Center for the Arts are available for purchase by calling the Box Office at 954-344-344-5990 or by going online to www.TheCenterCS.com.